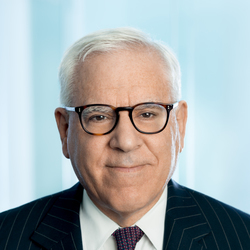 David M. Rubenstein is a Co-Founder and Co-Executive Chairman of The Carlyle Group, one of the world’s largest and most successful private investment firms. Mr. Rubenstein co-founded the firm in 1987. Since then, Carlyle has grown into a firm managing $223 billion from 33 offices around the world.

Mr. Rubenstein is Chairman of the Boards of Trustees of the John F. Kennedy Center for the Performing Arts, the Smithsonian Institution, and the Council on Foreign Relations; a Fellow of the Harvard Corporation; a Trustee of the National Gallery of Art, the University of Chicago, Memorial Sloan-Kettering Cancer Center, Johns Hopkins Medicine, the Institute for Advanced Study, the Brookings Institution, and the World Economic Forum; a Director of the Lincoln Center for the Performing Arts and the American Academy of Arts and Sciences; and President of the Economic Club of Washington.

Mr. Rubenstein is a member of the American Philosophical Society, Business Council, Harvard Global Advisory Council (Chairman), Madison Council of the Library of Congress (Chairman), Board of Dean’s Advisors of the Business School at Harvard, Advisory Board of the School of Economics and Management at Tsinghua University (former Chairman), and Board of the World Economic Forum Global Shapers Community.

Mr. Rubenstein is an original signer of The Giving Pledge, a significant donor to all of the above-mentioned non-profit organizations, and a recipient of the Carnegie Medal of Philanthropy, and the MoMA’s David Rockefeller Award, among other philanthropic awards.

Mr. Rubenstein has been a leader in the area of Patriotic Philanthropy, having made transformative gifts for the restoration or repair of the Washington Monument, Monticello, Montpelier, Mount Vernon, Arlington House, Iwo Jima Memorial, the Kennedy Center, the Smithsonian, the National Archives, the National Zoo, the Library of Congress, and the National Museum of African American History and Culture. Mr. Rubenstein has also provided to the U.S. government long-term loans of his rare copies of the Magna Carta, the Declaration of Independence, the U.S. Constitution, the Bill of Rights, the Emancipation Proclamation, the 13th Amendment, the first map of the U.S. (Abel Buell map), and the first book printed in the U.S. (Bay Psalm Book).

Mr. Rubenstein is the host of The David Rubenstein Show: Peer-to-Peer Conversations on Bloomberg TV and PBS.

From 1973-1975, Mr. Rubenstein practiced law in New York with Paul, Weiss, Rifkind, Wharton & Garrison. From 1975-1976, he served as Chief Counsel to the U.S. Senate Judiciary Committee’s Subcommittee on Constitutional Amendments. From 1977-1981, during the Carter Administration, Mr. Rubenstein was Deputy Assistant to the President for Domestic Policy. After his White House service and before co-founding Carlyle, Mr. Rubenstein practiced law in Washington with Shaw, Pittman, Potts & Trowbridge (now Pillsbury Winthrop Shaw Pittman). 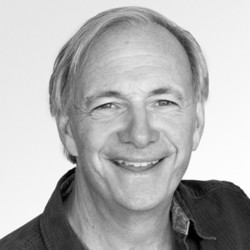 Ray Dalio is Founder, Co-Chairman and Co-Chief Investment Officer of Bridgewater Associates. He started Bridgewater out of his two-bedroom apartment in New York in 1975 and under his leadership, the firm has grown into the fifth most important private company in the US according to Fortune Magazine.

For his and Bridgewater's industry-changing innovations as well as his work advising policymakers around the world, Ray has been called the “Steve Jobs of Investing” by aiCIO Magazine and Wired Magazine, and named one of the 100 Most Influential People by TIME Magazine.

He is also the author of The New York Times #1 Bestseller Principles, which outlines his work and life principles, the foundation of Bridgewater’s distinctive culture and the cornerstone of his and Bridgewater’s success. Ray and Bridgewater also recently published Principles for Navigating Big Debt Crises, the first public dissemination of their research on these economic events, which enabled them to anticipate the 2008 Financial Crisis. Ray is currently working on his third book, which will outline his investment principles.

Ray holds a Bachelor of Science degree in Finance from C.W. Post College and an MBA degree from Harvard Business School. He has been married to his wife, Barbara, for over 40 years and has four grown sons. He is an avid philanthropist with a special interest in ocean exploration and conservation. 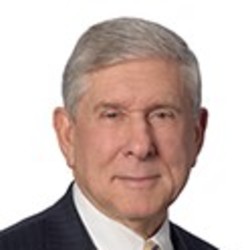 Paul N. Roth is a founding partner of Schulte Roth &Zabel and former chair of the firm’s Investment Management Group. Throughout his career, Paul has acted as counsel to leading public and private companies in financial services and to their boards of directors. His extensive private investment funds practice, an area in which he has more than 50 years of experience, includes the representation of hedge funds, private equity funds, offshore funds, investment advisers and broker-dealers in connection with fund formations and compliance, securities regulation, mergers and acquisitions (domestic and cross-border) and other financial transactions. Considered the “dean of the hedge fund bar,” Paul serves as a special adviser to the board of directors of the Managed Funds Association (MFA). He is the former chair of the Subcommittee on Hedge Funds of the ABA’s Committee on Federal Securities Regulation and the New York City Bar Association’s Committee on Securities Regulation.

Paul has been recognized as a leading funds lawyer by The Best Lawyers in America, which also named him New York City Private Funds/Hedge Funds Law Lawyer of the Year; Chambers Global, Chambers USA, IFLR1000, Expert Guide to the Best of the Best USA, Expert Guide to the World’s Leading Banking, Finance and Transactional Law Lawyers, Lawdragon 500 Leading Lawyers in America, The Legal 500 US, New York Super Lawyers, PLC Cross-border Investment Funds Handbook, Who’s Who in American Law, Who’s Who in America and Who’s Who Legal: The International Who’s Who of Private Funds Lawyers. Paul was recently honored at The Hedge Fund Journal Awards for his outstanding achievement in the hedge fund industry. He also received a Lifetime Achievement Award from Hedge Funds Care in recognition of his prominence in the hedge funds industry and his extraordinary commitment to philanthropy. He was named to HFMWeek’s 2010 list of the 50 most influential people in hedge funds. Paul is a former lecturer at the University of Pennsylvania’s Wharton School, where he taught “Responsibility in Professional Services.” of Business. He is currently an Adjunct Professor of Law at NYU School of Law, where he is teaching “Law and Management of Financial Services Businesses.” Paul graduated magna cum laude from Harvard College, cum laude from Harvard Law School and was awarded a Fulbright Fellowship to study law in the Netherlands. He served on the Advisory Board of Harvard Law School’s Center on Lawyers and the Professional Services Industry and formerly served as president and a trustee of the Harvard Law School Alumni Association of New York City. In addition, he is a senior director of the Legal Defense Fund of the NAACP and was a member of the advisory board of the RAND Center for Corporate Ethics and Governance, and he is a fellow of the New York Bar Foundation and the Phi Beta Kappa Society. From 2018-2020, Paul was also a lecturer of business ethics at University of Miami Graduate School of Business.

Please join YJP for a discussion with David Rubenstein, Co-Founder of The Carlyle Group and Ray Dalio, Founder of Bridgewater Associates.  Both David and Ray have unparalleled experiences and look forward to sharing their personal stories and paths in hopes of inspiring young professionals to make the most of their lives and careers.