We are excited to welcome Dottie Herman as a speaker of the real estate leaders series of digital mentorship roundtables to continue our mission of providing mentorship opportunities for young professionals while keeping our members safe and healthy. The roundtable will be held through YJPs digital platform.

This event is complimentary for:
Professional level members in the Real Estate division. 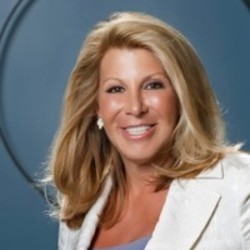 Dottie Herman is the Chief Executive Officer of Douglas Elliman, one of the nation’s oldest and largest real estate brokerage firms with approximately $27.4 billion in annual sales volume and 7,000 real estate agents. Ms. Herman purchased Douglas Elliman in 2003 in partnership with Douglas Elliman Chairman, Howard M. Lorber, after having started as a broker with Merrill Lynch’s Long Island Division and then expanding Prudential Long Island Realty into a powerhouse brokerage on Long Islands and the Hamptons. Since their acquisition, Douglas Elliman has achieved record sales year over year and continues to strategically expand into new markets.

Ms. Herman has been consistently ranked in Crain's New York Business 50 Most Powerful Women in New York, Inman News Top 100 Most Influential Real Estate Leaders and The New York Observer's The Power 100. In 2015, she was inducted into the into the Long Island Business News Hall of Fame and listed in the Top 50 Women Entrepreneurs in America by Inc. Magazine among the Inc. 5000 list where Douglas Elliman was named as one of the fastest-growing private companies in America. In 2016, Ms. Herman was named on Forbes 2016 List of America’s Self-Made Women as well as in 2017.

In addition, Ms. Herman received recognition as a Kenneth R. Gerrety Humanitarian Award at the annual Real Estate Board of New York (REBNY) and a BRAVA SmartCEO Award, recognizing exceptional female leaders for their contributions to business and philanthropy. Ms. Herman is involved with the New York Restoration Project, and is on the board of Gold Coast Bank, the Katz Women’s Hospital of the North Shore-LIJ Health System, Southampton Hospital, the American Heart Association and Every Woman Matters Walk: A Walk for Women and their Families.

Jordan
Login or register to view Jordan's details.
Sales Closed
Ticket sales have closed for this event and are no longer available.