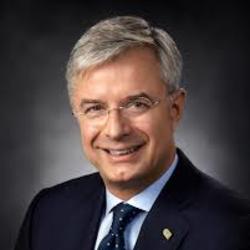 In January 2008, Joly was announced president and CEO of Carlson Companies, an American privately held international conglomerate in the hotel, travel and restaurant franchise industries employing more than 175,000 people in more than 160 countries and territories. Under his leadership, CWT grew its annual sales from US$8.9 billion in 2003 to $25.5 billion in 2007.

On August 17, 2012, Joly became CEO at Best Buy. Under Joly, the company's stock tripled in 2013 with the focus on banking on big box stores, superior customer service, product selection, and services like the Geek Squad.

On April 15, 2019, it was announced that Joly will step down as CEO of Best Buy and became executive chairman of Best Buy in June 2019. In addition to his current position as Best Buy’s chairman, he serves on the board of directors for Best Buy and Ralph Lauren.