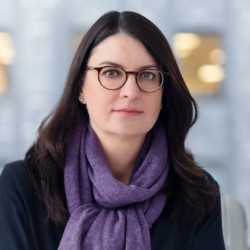 Kate was promoted to Global Chief Executive Officer of MRM in December 2018. In her previous role as
Global President and Chief Operating Officer, she was responsible for spearheading all of the worldwide
network’s strategies and policies as well as overseeing daily operations across all of our departments
and regions globally. Under her leadership, MRM experienced major growth in its overall business,
creative reputation and capabilities offering.
Her leadership has resulted in MRM being recognized with some of the industry’s highest accolades,
including being designated three years in a row (2017, 2018 and 2019) as a “Leader” in Gartner Inc.’s
Magic Quadrant for Global Marketing Agencies, as Ad Age’s B-to-B Agency of the Year in 2018, as the
Top Large Agency of the Year at the Digital Analytics Association’s Quanties Awards.
Kate first joined the McCann network in Toronto in 2006, rising in 2009 to become General Manager in
charge of the GM Canada business. In the spring of 2012, the Commonwealth//McCann agency was
created to handle the consolidated global Chevrolet account, with Kate joining the newly formed
Detroit-based unit as Director of Global Operations. In 2014, Kate was promoted to EVP, Executive
Director of Global Operations. She was named Global Chief Operating Officer for MRM in 2016, and was
promoted to Global President in December 2017.
Kate’s success comes from more than 25 years of marketing communications experience throughout a
wide spectrum of categories. She knows how to build strong brands and deliver award-winning work,
and is uniquely skilled at providing the vision necessary to ensure global efficiency, consistency and
excellence. She began her career in 1992 in her native Canada working on the Procter & Gamble account
at Grey Canada. In 1994, she moved to Cossette Communications Marketing Toronto, where she
developed integrated communications solutions for accounts across diverse sectors such as retail,
financial services and telecom. It also led to her entry into automotive marketing. In 2004, she was
promoted at Cossette to VP, National Business Leader with responsibility for a range of accounts,
including General Motors of Canada Ltd, Shoppers Drug Mart, the Ontario Lottery Corporation and
Petro-Canada.
Kate’s drive and passion are always evident, she brings a unique level of commitment to everything she does.

Attendees will have the opportunity to partake in an intimate and candid roundtable discussion with Kate MacNevin and a group of 15 young marketing/media industry professionals.

This event is included for the following member chapters:

YJP has a non-solicitation policy covering all of our conferences and events. In order to provide a distraction-free environment for our mentors, sponsors, attendees, and employees, we do not allow solicitation at our events by attendees or unauthorized parties without the express written permission or consent from YJP.